Time zone of the “Academic quarter”

An academic quarter is 15 minutes long and means that you start 15 minutes after a scheduled starting time. And, just in front of the university fountain you find the time zone of the “Academic quarter”. The tradition of the academic quarter at Lund University dates back to the 1700’s when only professors could afford wearing a clock. Students and university staff had to rely on the loud church bells instead.

In January 1728 Arvid Moller, a Philosophy professor, was announced Vice-chancellor of Lund University. He experienced that his fellow co-workers and students in general suffered from bad discipline since they kept being late for meetings and lectures. Therefore, one of the first things he declared was a penalty fee for everyone who arrived 15 minutes after a scheduled appointment. The reason 15 minutes or less was the accepted tardiness, was that everyone should have time to hear the church bells, get ready and travel to their destination. As proof of this tradition, the clock bell on the University main building wall tolls both full hour and 15 minutes past.

Being a Lund alumni you will know that it takes approx. 15 minutes or less to travel pretty much anywhere (by bike) in Lund.

The original Sphinx and a lady’s head

In the Botanical Garden, you find one of the original sphinxes that graced the University main building at its opening ceremony in 1882. However, due to the lacking quality in the cement of that time, all four sphinxes had to be removed in 1959 as a safety precaution. Their replacements came in 1993 thanks to generous donations to the university.

If you would have visited the opening ceremony in 1882, you would also have seen four grand female statues by the doors of the university building. The four statues represented the four faculties of that time: Theology, Medicine, Philosophy and Law. The ladies had to be removed in 1902, however, due the bad concrete they were made of. It is also said that they were removed since people were scared when passing them late at night. Today, you can find the head of one of the statues at the Kulturen Museum.

Giant Finn in the Cathedral crypt 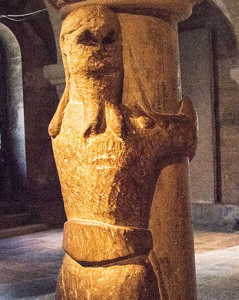 Most of you probably know the fairytale about how Lund Cathedral was built by Giant Finn. According to the story, the giant was infuriated (obviously!) when he found out that he was not getting paid for his hard work building the Cathedral. He ran down the Cathedral crypt, clung on to one of the pillars to tear the whole thing down. However, by this point in time the Cathedral had godly protection and Giant Finn instantly turned to stone. If you visit the Cathedral today, you will find Finn holding on to the pillars in the crypt.

If we look past the fairytale, the figure is most likely the biblical figure Simson. If you want to have a look of the giant/Simson online, click here.

Ever wondered how much the typical Swedish expression “lagom” is? Well, head out to Sandgatan and the Paradise park, just above the AF-building. In front of Gamla Kirurgen you will find the perfect measurement and example of “lagom”. It was placed there in 1992 by Uarda-akademien.

Maybe you have passed the tall white poles at LTH, the Faculty of Engineering? This is the last memory of an art project that really didn’t go as planned. This was originally meant to be a fountain, an art piece where water would run as beautiful waterfalls between fountain pools, into the LTH pond. However, just a short time after the inauguration in 1968 the dream and the fountain fell apart when a number of the pool sections broke. Many attempts to restore and save the fountain were made. But, in the 1990’s it was decided that the most sensible decision was to remove the pools, restore the poles and leave it be. The fountain got to present its former glory one last time in 1996. Today the fountain is part of the LTH area and architecture and a piece of university history.

Other sources: The book “Lund University of the 350 Years: History and Stories” by Björn Magnusson Staaf, Fredrik Tersmeden and Petra Francke. And, Wikipedia.