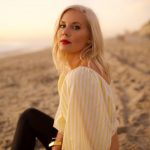 Can you describe yourself in three words?

You received your master’s degree in European Studies in 2013, what have you been up to since you graduated from Lund University?

A lot. For the first couple of years, I was traveling back and forth between Europe and the United States, working with travel brands and tourism boards for my blog. After a while, I wanted to explore more places that were lesser traveled and where tourism boards were almost impossible to work with, so that’s when I started getting involved with tourism development projects funded by organizations like USAID, UNDP or the EU.

The biggest one I was lucky to be a part of was Via Dinarica, which extends from Slovenia to Albania and serves to connect the cities and rural communities in and around the Dinaric Alps. During the time spent promoting that project is when I started falling in love with the Balkan region. By 2015, I decided that in order for me to continue my passion of working with tourism in that part of the world, I had to move there. So I did.

For two years, I lived in Prishtina, Kosovo working on whatever kind of tourism-related opportunities I could get in all the neighboring countries, while maintaining a full-time position at a private university as the coordinator of its tourism center, which I helped establish.

At the end of 2017, I made the decision to move back to California, where I have lived since, and just launched a company specializing in Balkan travel from tours to trip consulting. While my base is in North America now, I am trying to spend at least 2-3 months a year in the Balkans and exploring other new, lesser-traveled destinations.

Has your Lund University education been beneficial in your work?

Absolutely. For starters, I can officially call myself a “Master of Europe” since I received a Master of Arts in European Studies, which has helped build more credibility for my blog and brand, considering its primary focus has been European travel.

I actually could not have picked a better program or coordinators (shout out to Anamaria Dutceac Segesten and Mattias Novak) to prep me for the work I would eventually do in the tourism development sphere. Among other things, it has been very helpful when I for instance write about destinations and add the many layers of a location, such as identity and history.

Did you travel a lot as a child with your family?

I’m super lucky to have grown up taking family trips a few times a year, even if they weren’t far or exotic (like Las Vegas), the point was just to get out of the house and go on an adventure.

When did you discover that you had the travel bug and what initiated it?

When I was 15, we took a big trip to Europe, from Spain to the south of France, and that is when my fascination with the continent really began. My main goal in life was to live there, anywhere. Suffice to say, I have achieved that a handful of times by now.

What place would you not travel to again?

I would give any place a second or third chance even if I didn’t have a good experience the first time…but I would definitely be okay never going to Paris again (I can say that with confidence after six visits).

Which is your absolute top destination?

For the moment, Albania

You say that you do not only want to travel to countries, but to connect with them. What is one of the most memorable connections you have made abroad?

The ones I still have. From really great friends I made to local boat captains and bar owners, I’m lucky to have small and large networks in a lot of different countries that I can still reach out to any time I want to ask about anything from current political situations to how the weather is.

When you travel, do you always try all the local food no matter what it is?

Mostly yes, but I’m not into extreme organs. Heart, lungs, brain, etc…I would not willingly eat those, though it is very possible I unwillingly have done so due to language barriers.

You traveled around for 10 years living out of a suitcase, now you live back in California, what made you slow down?

Constantly traveling and moving around wears you down and I just finally got to a point where the last thing I wanted to think about was starting over again somewhere or even planning travels longer than a carry-on bag would last, which for me is like 3-4 weeks. I also wanted to be closer to my family.

Where are you heading next?

Back to the Balkans! I will be offering tours through North Macedonia (newly re-named) and Albania this year. I would love to get some fellow Lunders on it, so will be offering anyone who is a current/former student or faculty at Lund University 15% off any of my upcoming tours – just mention this interview.